Wooden battery-floor turns on LED lights when someone walks by 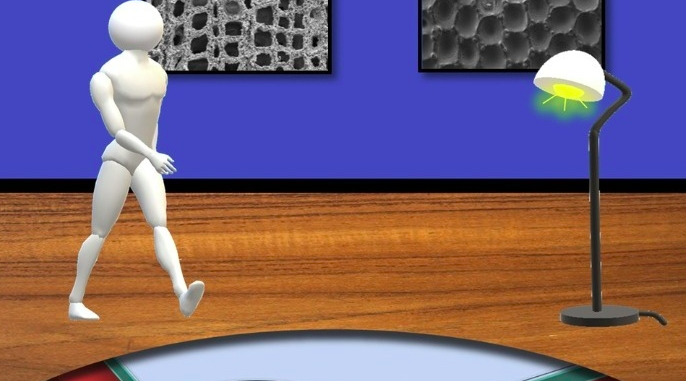 Wooden battery-floor turns on LED lights when someone walks by

A nano generator allows wood to generate electricity from the steps.

This is due to a nanogenerator, that allows wood to generate electricity from the steps to the floor.The wood used in the generator is coated with a layer of silicone and has built-in nanocrystals, making it a device 80 times more efficient than a simple wood floor and generating enough current to power LED lamps and small electronics.The scientists, led by Guido Pancharaza, professor at the Department of Materials of the Swiss Federal Institute of Technology (ETH) in Zurich, who published the paper in the journal Matter, placed the wood as a "sandwich" between electrodes. The floor is electrically charged by periodic contact with pressure from human feet, based on the so-called trielectric effect. The electrons produced in the wood are then transferred from one object to another, generating electricity.According to him, wood is basically rub-neutral. This means that it has no real tendency to gain or lose electrons, which limits its ability to generate electricity. So the challenge is to create a wood that is capable of attracting and losing electrons.The improvement of the trielectric properties was achieved by covering a part of the wood with PDMS silicone, which generates electrons on contact, and another part of the wood with ZIF-8 nanocrystals, which give the wood the property of losing electrons. After testing different types of wood, the spruce was selected, because of its greater ability to be converted into a nanogenerator. It also shows stable electricity production for up to 1,500 "charging" cycles.Experiments have shown that a wood surface almost as big as a sheet of paper can produce enough power to light a house's LEDs, as well as power small appliances such as computers. When a person walks on the floor, he can automatically turn on a connected LED lamp in the room.The researchers pointed out that the fir tree is cheap and widely available, and that the whole method of turning it into a generator can be applied en masse on an industrial scale. Such floors can be sources of "green" energy in future "smart" homes.The next step for researchers will be to further improve their material, with chemical coatings that will be more environmentally friendly and easy to use, to facilitate its practical applications. As Pantsaraza said, "the ultimate goal is to understand the potential of wood beyond what is already known and thus allow wood to acquire new properties suitable for future sustainable and smart buildings."